Kiran shah was born in Nairobi, Kenya in 1956. Kiran left Kenya when he was 12 years old as his family decided to relocate to India. It was in India that Kiran’s interest in films began however due to his father’s ill health this was put on hold and the family moved to England to join Kiran’s older brother.

Kiran continued his studies in England however he was still interested in show business. In 1973 when he was 17 years old he spotted an advert in ‘Timeout’ magazine for the Red Buddha Theatre Company, encouraged by his brother and family he decided to audition. He won the part of the main clown mime artist and went on tour with the company to Italy with the play ‘Man From The East’. In the next four years he appeared in various experimental theatre productions.

In 1976 Kiran was working on his first film ‘Candleshoe’ starring David Niven and Jodie Foster as a stand-in for one of the main characters; it was on location that stunt coordinator Bob Anderson asked him to perform stunts for that same character. This was his break into stunt work and he hasn’t looked back since. 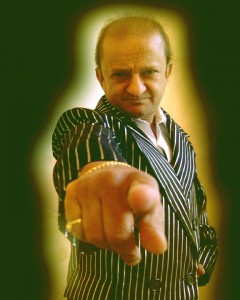 Kiran has performed stunts on many big blockbuster films. These include ‘Superman & Superman II’ where he was the scale double for Christopher Reeve. In ‘Aliens’ performing stunts for the character Newt. ‘Titanic’ performing a number of high falls as the ship sank and also the scene when Leonardo finds and helps a little boy. Others include’ James Bond’, ‘Harry Potter’ and many many more.

Kiran spent four years in New Zealand working on Peter Jackson’s trilogy ‘The Lord of the Rings’. He worked as a scale and stunt double for all four hobbits mainly Frodo working closely with Elijah Wood. It is surprising how many times you see Kiran on screen without knowing it’s him.

It was also on ‘Candleshoe’ that Kiran got his break into acting, he was spotted by producer John Dark who asked him to audition for the film ‘The People that Time Forgot’. Since then Kiran has acted in numerous film, television productions, commercials and videos.

Kiran has acted in some of the best films of all time; one of the most iconic is ‘Star Wars – Return of the Jedi’ as a Ewok. He has also acted in ‘Indiana Jones – Raiders of the Lost Ark’, ‘Dark Crystal’, ‘Sherlock Holmes’ with the late Charlton Heston, ‘Gothic’ as Fuseli’s monster, ‘Baron Munchausen’ starring Uma Thurman in one of her early films, ‘Alice in Wonderland’ as the white rabbit and more recently in ‘Paa’ with Bollywood’s greatest Amitabh Bachchan. This is just a small selection of films he has been in.

Kiran was pleased to return to New Zealand for a year filming ‘Chronicles of Narnia’ he played the part of the white witch Tilda Swinton’s evil helper ‘Ginaarbrik’.

He has also worked on many television productions, some of these include ‘Worzel Gummidge’ as a scarecrow, ‘Keith Harris Show’, the original TV series of ‘Chronicles of Narnia’ as the badger. Others include ‘Dr Jekyll & Mr Hyde’ with Michael Caine, ‘Paul Daniels Magic Show’, ‘Russ Abbot Show’, ‘Young Indiana Jones Chronicles’, ‘Noel’s House Party’, ‘Shameless’, ‘That Mitchell & Webb Look’, ‘The Passion’, ‘Peter Kay Pop Factor X’ as one of the group ‘Men to Boyz’ and lots more. Kiran performed many characters on TFI Friday, Chunky the Monk and impersonating Tom Cruise with Anthony Edwards were crowd favourites.

In the early 80’s to the 90’s Kiran as well as acting worked with the magician Simon Drake. They both were the entertainers for the stars and celebrities of that time and held shows at exclusive spots in London where some of the crowd would include the likes of Paul McCartney, George Harrison, Eric Clapton, Phil Collins, Roger Waters (Pink Floyd), Richard Branson, Terry Gilliam and many other known actors/actresses and bands. In 1983 both Kiran and Simon went on tour with musician Julian Lennon (Son of Legend John Lennon) as his supporting act touring all over America and Canada. The height of their act was when they were invited to perform as the only entertainers for Tina Turner at her 50th birthday bash.

Kiran has also starred in renowned commercials including the ‘Tango’ adverts with the famous phrase ‘you’ve been tangoed’ as the tango man. The Nestle milk ad in Germany as the bear, Heart FM as an alien, Wrigley’s Airwaves as an alien, Alfa Romeo as a sloth which became huge in Italy, and the funny Pipex ad as Mini Hoff also starring David Hasslehoff.

Kiran and his nephew Kit have directed a short film called ‘Still Living’, a physiological thriller. This has been played at Cannes and Edinburgh film festivals to list a few and also received the runner up prize at the HD Fest Film Festival in LA and it was also part of the shortlist for ‘Without Borders’. Because of its success it is in a small minority of short films to be distributed commercially.

Kiran also writes poetry, his work has been published in Britain and America. His poems are based on his thoughts and feelings about the places he has been and the experiences he has had.

Kiran has had the pleasure of working with some of the best directors of all time; these include Peter Jackson, James Cameron, Ridley Scott, Terry Gilliam, Steven Spielberg, George Lucas, Ken Russell, Andrew Adamson, Michael Winner and many more. Kiran is also known to enjoy working with up and coming talented directors.